Will be a Pilgrimage to the TMP Seroja in east Timor, the TNI Commander to Bring your Warakawuri 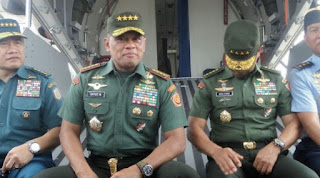 Head of Lighting Korem 161/Wirasakti Kupang Mayor IBP Diana Sukertia say, the MILITARY Commander JenderalGatot Heads, will pay a visit to the Taman Makam Pahlawan Seroja, Timor Leste. According to Sukertia, prior to Timor Leste, Billy will stay in the City of Kupang, NTT.

“This afternoon around 17.30 Pm, Panglima TNI Jenderal Gatot Heads and his entourage arrived at the Airfield of El Tari Kupang. He was a transit overnight in Kupang to continue the journey tomorrow morning Wednesday (20/9/2017) to Timor-Leste to carry out a pilgrimage in the TMP Seroja Dili,”said Sukertia to Kompas.com on Tuesday (19/9/2017).

In addition to the TMP Seroja further Sukertia, Gatot Nurmantio will also visit the taman makam pahlawan in the District of Baucau to include nine warakawuri or the wife of a soldier who died in East Timor (Timor Leste).

According to Sukertia, the visit of the Commander in chief Heads to the City of Kupang only to the extent of the transit at once to pick up three people warakawuri from NTT before continue the flight to Timor Leste.

Sukertia mention, about nine warakawuri to the Commander of TNI to east Timor. Gatot together with the group will be to Dili, Timor with the special flight.

“This activity as a form of appreciation to those who have fallen at that time, as well as give a chance to the wives and families visit the graves of their husbands,” he said.

Billy will be accompanied by the third Chief of Staff of the Army as well as some high-ranking officials in the MILITARY Headquarters.