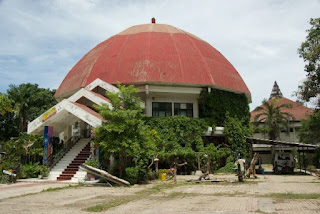 Preserve the cultural heritage of Timor-Leste it is important, so is the preservation of the cultural value of historic buildings such as the Arte Moris, write Khoo Ying Hooi.

I feel annoyed and frustrated with the news on 6 July about the decision of the Prime Minister of Timor-Leste Taur Matan Ruak to hand building Arte Moris to the office of the Council of Veterans.

In 2017, I write public comments about Arte Moris in 2017 titled “How art heals and galvanizing the youth of Timor-Leste”, which originally appeared in The Conversation.

Public comments are surprisingly widely shared on various news portals including the Asia Times, Huffington Post and the Myanmar Times. This shows the extent of interest in politics and the art of Timor-Leste from various parts of the world and the importance of the discourse.

Established in the year 2003, only a year after the restoration of Timor-Leste in 2002, Arte Moris offers a place for young Timorese to express themselves through the arts while helping them bond and share the positive values of their country.

Arte Moris started as a small project by a couple of Swiss with a group of young people. Slowly turned into public space are well known, especially for the young people of Timor, including children, to class free art.

In a country where the search for identity of the state continues and in which nationalism is largely built on traditional local cultures, with the challenge to distance themselves from the influence of the colonial powers earlier, the role of art can not be overlooked or ignored.

Young people and children seeking their identity at a very young age by observing and recognizing the environment around them to find who they are, and Arte Moris provides such a space for them.

In the year of its inception, Arte Moris was awarded the united nations Human Rights to advocating freedom of expression.

But the purpose of Arte Moris is not only to promote art. Greater vision, namely the hope of helping the people of east Timor to rebuild his life after the struggle for independence bloody long that killed a quarter of its population.

Anyone who has been to Timor-Leste will see the importance of murals and graffiti. This is one of the tools of communication most inclusive in this small country.

How do I learn about politics and human rights in Timor-Leste? This is a country which have so far been isolated in the discourse of south east Asia, and many misconceptions about this beautiful country also.

I must admit that I didn't learn it from books or famous figures; I learned a lot from the people I meet during my travels for different purposes. In 2010, I wrote my first paper on human rights in Timor-Leste. In 2013, I visited the country for the first time when performing official duties, and again in 2016.

Arte Moris, the art school is free, should be considered as a turning point in the way I study the political and human rights. Now I appreciate the bottom-up approach. The people in the streets and communities that I meet that form my view of the country, for which I will be indebted forever.

I really hope the government of Timor-Leste can reconsider its decision and allow the Arte Moris continue its existence as a public space for art. The creativity and originality of artists Timor at the Arte Moris and across the country is very awesome. They represent the reality.

Arte Moris has been gaining recognition in the world; unfortunately, if not appreciated in his own country. At this time, the status of Arte Moris is threatened.

Preserving cultural heritage in Timor-Leste is important, similarly for the preservation and promotion of cultural values of historic buildings such as the Arte Moris.