Indonesia-Timor Leste Agree To Settle The Dispute The Boundary 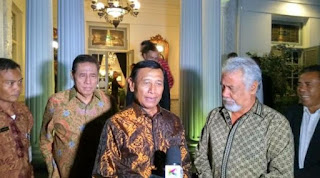 Indonesian Government agreed to re-discuss the problem of the boundary with Timor Leste.

Up to now the limit of mainland unresolved, namely the border in the region of the Noel Besi di Kabupaten Kupang, Nusa Tenggara Timur, and Citrana in Timor Leste. So also the border in Bijaelsunan, Kabupaten Timor Tengah Utara, and oben Monday in Timor-Leste contributed to the discussion. The two countries also agreed to establish a Senior officials Consultation (SOC), a small group which will discuss the technical settlement of the dispute land borders.

The plan of this team work in March 2017. However, talks regarding the boundary of the two countries had stalled because Timor-Leste is carrying out the presidential election in March 2017 and followed by legislative elections to determine the prime minister as head of government in July 2017.

Coordinating minister for Political, Law and Security (Menko Polhukam) Wiranto said, thes discussions related to the boundary does not mean the settlement of the dispute stopped. ”The process of settlement yesterday disrupted because there is a presidential election in there (Timor Leste), but not can not be solved. Now (election of the president in Timor-Leste) have already finished, out we go again. Hopefully a fast finish,” said Wiranto.

While Xanana Gusmao also hope soon to solve the problems of the border of the two countries. According to him, although talks regarding the settlement of the boundary in Noel Iron and Citrana was stopped due to political dynamics, but the east Timor Government that now wants to keep so the issue of the boundary can be resolved quickly.

”I want to update because in fact we already give a little advice from the previous meeting. But, because there are the evolution of politics and the political dynamics there (Timor Leste), I tell friends here that wait first yes,” said Xanana. He added, he also thanked the Government of Indonesia which can be understood with the conditions in his country despite making thes the process of completion.

”Therefore, meeting here as friends, companions, and represent the two neighboring countries who are friends also,” he said. Wiranto also said Indonesia wanted to resolve the problems quickly considering negotiations related to the dispute over the boundary has been ongoing since 2002.

Moreover in 2010 and 2012, the Government of Timor-Leste had the opportunity to build the immigration office in Noel Iron with Citrana and Bijael Sunan oben Monday, although the two countries have not yet reached a meeting point. He also hopes the problem of the border is completed properly so that the accepted international law. ”We agreed to finish in a fast, correct, good, and accepted by international law,” he said.