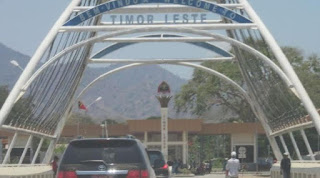 Ambassador of the Republic of Indonesia to Timor Leste Sahat Sitorus said the Government of Timor-Leste immediately revise the agreement on air to support international flights in the country.

“In the near future there will be a revision of the ‘water agreement’ (the agreement of air) so that it can open the lines of international flights,” said Sitorus in a meeting with the Governor of East Nusa tenggara (NTT) Frans Lebu Raya in Kupang, Wednesday (4/10/2017).

He admitted, his visit to NTT bordering the region directly with Timor Leste in the Timor Island, it carries a special mission to discuss the route of international flights between Dili and Kupang, with local government.

According to him, NTT and Timor Leste has a very close connection and have an interest and dependence on each other such as in the field of transport and the economy in general.

To that end, a meeting with the Governor Frans Lebu Raya it becomes important in establishing bilateral relations between Indonesia and Timor Leste so that a direct flight both areas soon realized to support the work of the same question.

In addition to bilateral relations, he said, the trilateral cooperation Indonesia-Timor Leste-Australia needs to be done in a more real again in all sectors including licensing.

He calls, cooperation a number of sectors of the economy that need to be strengthened such as the tourism sector, agriculture, transport, and maritime affairs and fisheries.

In the context of a broader cooperation that, We expect the participation of the local government to continue to maintain the smoothness of the human traffic that passes the border (cross the border).

“Need to continue to diiingatkan that there is international law in crossing the state border, should be furnished a passport document,” he said.

This is to minimize the presence of immigration problems that can interfere with good relations between the two countries, he said again.

“We need to keep the interests of the wider future for the two countries to move forward together. We also support the construction of economic empowerment for the people of the border according to the program of Ramadan, President Joko Widodo. Bottom line, we will also support all program Mr. Governor,” he said.

Meanwhile, NTT Governor Frans Lebu Raya said the trilateral cooperation during this walk better although the concrete need to be sharpened again with the implementation of the sector-a sector that has been agreed with third countries.

While related to licensing as a requirement, he said, it becomes important to provide the opportunity for businesses is it investing, both in the field of transport and other sectors.

“NTT has a lot of potential that can be nenarik many investors. The tourism sector is a sector that is promising for investment opportunities also the marine and fisheries sector,” said NTT Governor two that period.