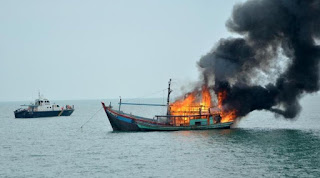 The Government to arrest the ship Fu Yuan Yu 831 belongs to the Fuzhou Hongdong Pelagic Fishery Co. Ltd. from China that is suspected of stealing fish in indonesian Fisheries Management Area of Indonesia. A ship with size 598 Gross Tonnage (GT) is considered illegal because it has the permission to arrest only in the territory of Timor Leste.

The minister of Marine and Fisheries Susi Pudjiastuti said Indonesia and Timor Leste have the same perception to prevent the illegal arrest. “We have signed a joint communique to work together to tackle IUUF in the territory of both parties,” said Susi told reporters in Jakarta, Thursday (4/12).

Based on data from the Global Fishing Watch, Fu Yuan Yu 831 has been detected 19 times enter the waters of Indonesia on August up to November 2017. The arrest was made task Force 115 on Saturday (3/12) with the findings of approximately 35 tons of fish and hundreds of tiger sharks which are a protected species.

The time of the arrest, found the six flags of different countries namely Indonesia, Timor Leste, China, the Philippines, Singapore, and Malaysia. “The rules of the international, multiple flag is not justified,” said Susi.

The ship Fu Yuan Yu 831 consists of Captain Wong Zhi Yi with 21 crew (ABK) from Indonesia six people, China's nine people, Vietnam, and Myanmar-three people. This time, the ship was in the investigation and examination of the police at the Port of Kupang, East Nusa Tenggara.

The fate of the ship that was captured will be determined after the investigation is completed. In addition to sunk, the other option is the take over of ownership to be used as museum objects or tools exercise task Force 115.

To make law enforcement efforts effectively while keeping good relations between Indonesia and China, Susi will run the process in a professional manner. He also will soon send a letter to the Ministry of foreign Affairs to inform the Embassy of the country concerned.

Susi stated the cooperation with neighboring countries has a positive impact for the marine and global fisheries. “In addition to Timor Leste, the joint communique has been run by Papua New Guinea, Norway, and Fiji,” he said.

The ambassador of Timor Leste Alberto XP Carlos reveals he has also captured 15 vessel Fu Yuan Yu series 9607 to 9621. “The ships are being processed and the team from Indonesia will join to conduct the investigation,” said Carlos.

The whole ship Fu Yuan Yu captured is the ownership of PT Dwi Karya and Avona Mitra Lestari. According to Carlos, the ships are owned by China and have a problem of permission in Indonesia.

He explained the cooperation between the two countries is the right step because it could help each other. “Timor Leste is experiencing losses of up to US$ 45 million each year because of illegal fishing,” said Carlos.